Windows? No, I'm a .NET developer.

A couple of days ago, I talked about and coded some of the new ASP.NET Core 1.0 things at the Swetugg 2016 conference in Stockholm. I used my Ubuntu laptop, the one I write code on every day at work (also used for occasional night coding at home, when the kids are sleeping).

Nowadays, I mostly write Python and JavaScript code, both are platform independent languages. I love it! When I was about to begin where I currently work, I knew very little about what kind of dev tools the team (or even the Python community) were using.

"Well, some of us use editors like Sublime or Vim, some use an IDE like PyCharm. Most of us have macbooks, but a couple of team members have various Linux distros installed on their computers. It doesn't matter. You'll be fine as long as you can run the 'make' command. What stuff do you use?"

I think my brain exploded.

Remember this movie scene? That was me.

(it's from the 1990 version of Total Recall. The AI/robot/thing gets an unexpected question from a human, doesn't know how to respond and finally breaks.)

I have never, ever, in my life as a software developer heard that question before! .NET development usually equals Windows and (often a specific version of) Visual Studio, at least from my experience.

On my first day at work I was very excited to use Ubuntu, code in PyCharm and write strange terminal commands. Today, a couple of months later, the terminal has become my new best friend. Ubuntu is fast, responsive and doesn't get in my way. Well, sometimes a bit tricky to use when native apps are missing, but that's fine. It feels like I'm on a diet.

It would be great if we, the .NET people, also were able to freely choose our favourite tools, editors and even operating system.

In fact, .NET developers can do all of that now.

I have been following the development of ASP.NET 5 (recently renamed to ASP.NET Core 1.0) from the early beta versions, and started experimenting with it on my Ubuntu Linux machine a couple of months ago. This is my current setup: write C# code in Atom, push commits to GitHub, trigger builds and publish to Azure Web Apps when pull requests are merged. 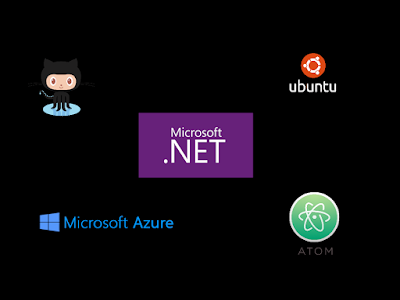 Developing on a Linux dev machine and publishing to a cloud based Windows machine.

Atom, really? I know, Visual Studio is hard to compete with, especially when used together with ReSharper. But editors like Atom are lightweight. I like that. They are not only lightweight, they also have the possibility to install plugins like OmniSharp. OmniSharp add editor features close to the ReSharper experience.

Lightweight tools need friends, and one of them is the terminal. It might be a bit intimidating at first if you are not already a command line user. It was for me. Now, I rather write oneliners like this, than right clicking some menu option or opening a dialog window:

Once learned, it is so simple. Let's stay in the command line window, because there is another essential tool for platform independent .NET development: Yeoman. 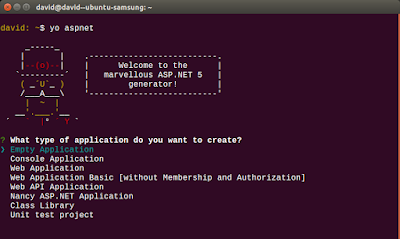 With Yeoman, we get the command line version of "File -> new project". You can also install Yeoman as a plugin to Atom. I usually create a new C# project from the command line and later add files using the Atom plugin.

What about Mono?
I haven't figured out how to exclusively use the new modular CoreCLR on my Linux machine. I can't get it to work without selecting the Mono version in the .NET version manager (the dnvm command). I guess it will be fixed soon, but it doesn't really matter if you want to get started now. Mono is the platform independent version of the system wide installed .NET Framework on your Windows machine.

Besides that, Mono comes with a great tool: the REPL.

Great for experimenting and learning about new cool C# features. Just type the word csharp in the terminal and start experimenting & learning. 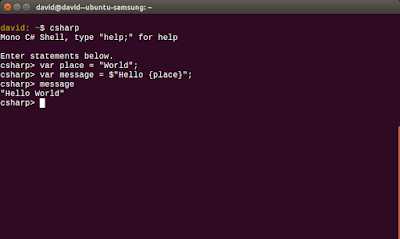 So far, the .NET development on Linux experience has been very nice.

Have you thought about trying out VSCode? I've messed with it for a few minutes. Not a ton of time, though. I use visual studio and write C# for my day job. Wondering how VSCode holds up.

Atom's pretty great, though. I've been using it for programming for fun, mostly with Haskell and Python. I really dig it too.

It's funny for me, because I started off in vim and linux, writing ruby for giggles, then landed my first full time job and switched wholesale to windows. I really like both environments for different reasons. I'm also adamantly following the neovim project.

Anyhow, interesting to see someone making the transition in the other direction (though I never did linux/python professionally)

Thank you for sharing!

I think VSCode is a really good tool. Installed it but haven't yet tried it that much. But my impressions are (along with reading user comments about it) is that VSCode currently is just as good (or even a bit better) for asp.net core 1 development as Atom.